When my husband & I moved to Hancock, NH from Colorado, we were already in the mode of seeking out alternative energy options. We bought one of the earliest model of the Prius when it came out in 2003 ~ and are still driving it today eleven years later. The home where we now reside was my grandmother's, Thelma Babbitt. Her husband bought this 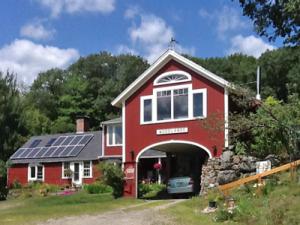 home in 1945 and my grandmother spent much time here on the weekends and holidays prior to moving here fulltime in the mid 1970's. As an active and engaged citizen for her whole life, conservation and valuing the earth's resources was a central focus of her time and energy once she moved to Hancock and has been a central element of my own family lineage.

With 55 acres of woods at our disposal, we continued to carry on the tradition of heating our home with wood. Built in 1789, this house like most others of its generation is well placed on the landscape. Facing due south it is perfectly situated for a solar power system. We had been exploring the various alternative energy options and then the ice storm of December 2008 hit and we were without power for eight days. Cozy with our fires and hauling water from our running brook, we were fortunate to be very comfortable during this time of hardship for many. When we learned that New Hampshire had finally passed some legislation to reimburse homeowners for putting in alternative energy options, that was all we needed to take the leap and get some quotes to put in a photovoltaic system.

John Kondos was referred to us as a good person to work with and he came out and walked us through the various options. In May 2009 we hired Solar Source to install a 2.28 KWP Photovoltaic System. It includes 12 ES-190 modules, with a grid inverter, and a back-up battery bank. When the power is on the system feeds directly into our meter and turns it back for an annual saving of approximately $650 ~ approximately 1/3 of our total power needs ~ and that is without trying to be as radical as my grandmother was in conserving electricity. Her electric bill would have been very easily covered by the system and there would have been surplus!

When the power goes down, the system automatically flips to the battery bank and powers our water pump, refrigerator, and a few outlets in the kitchen. This last year when hurricane Sandy hit and we were out of power for 36 hours, we not only had heat, water, and food in our fridge, we ran a long extension cord from an outlet in the kitchen to upstairs router and had wireless computer function!

The total cost of the system was: $24,750. We received a rebate check for $6,000 from the State of New Hampshire for installing a residential PV system. In addition, we filed for a federal tax credit of $7,425 ~ 30% of the cost of the system. The system comes with a 25 year warranty. We figured a payback on our investment to be about 15 years. However with the steadily increasing costs of electricity, it may be less than this.

We are delighted with this system and have had absolutely no issues with it since the day it was installed. It fills the available space on our south-facing roof so there was no way to create a larger system at the time we installed it. As the technology continues to change if there is a simple way to increase the overall size of the system we would most likely invest the resources to do this. The main reason we installed this solar system was to assist in moving forward the reality of renewable energy. The more people who take this leap the more affordable it becomes and the faster the technology will improve.

In support of assisting the town of Hancock towards energy independence.