Here is a brief history of what we believe was the first solar power operated home in Hancock.

The Jaquith place that we purchased in 1983 was located on a class VI road in Hancock. As there was no electrical power or town road service to the property, we decided after renovating the house to install what 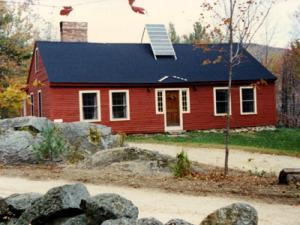 was for us an affordable and useable solar electrical system, used in combination with a backup generator. We learned there was a 40% federal rebate available at that time for the installation of qualifying solar systems. We also discovered that since such solar systems were quite new in the northeast, there were few available as a packaged unit.

That being the case, in 1986 our son Richard designed and put together on-site the separate parts that were needed for the off-grid system, purchasing necessary parts from various hardware and automotive stores. The system included one 8-section solar panel, an inverter to convert 24 volts to 12 volts, 12 deep cycle golf cart batteries in the cellar for power storage, and a backup generator. The 5,000 watt generator, powered by a used Yanmar diesel engine from a sailboat, was run by a pulley system made by a machine shop in Jaffrey; it was designed so the engine rate for the generator would run at the correct RPM's. The generator was housed inside a separate building located about 90 ft. from the house, with all power coming in to the main house underground. A relay system in the basement turned off the solar power and put the generator power directly to the electrical panel and vice versa.

At top production, the solar panel generated around 10 amps of power on a sunny day. All current went through the storage batteries, charging them as well as providing electricity for the house. Inside, the system powered a capacitor-start washing machine and a 110 volt shallow well pump that was located 400 feet down hill from the house. Other appliances included gas operated stove, dryer and refrigerator, as well as an on-demand hot water heater. A final feature was a remote start switch in the kitchen that allowed us to use solar or generator power.

Today's systems are undoubtedly much more sophisticated and efficient. Yet for nearly five years this simple unit provided enough electricity for our family of three to function quite comfortably and easily. When the house was sold, electrical power was installed and the solar system parts recycled to various people in the area who were in need of components for their fledgling systems.